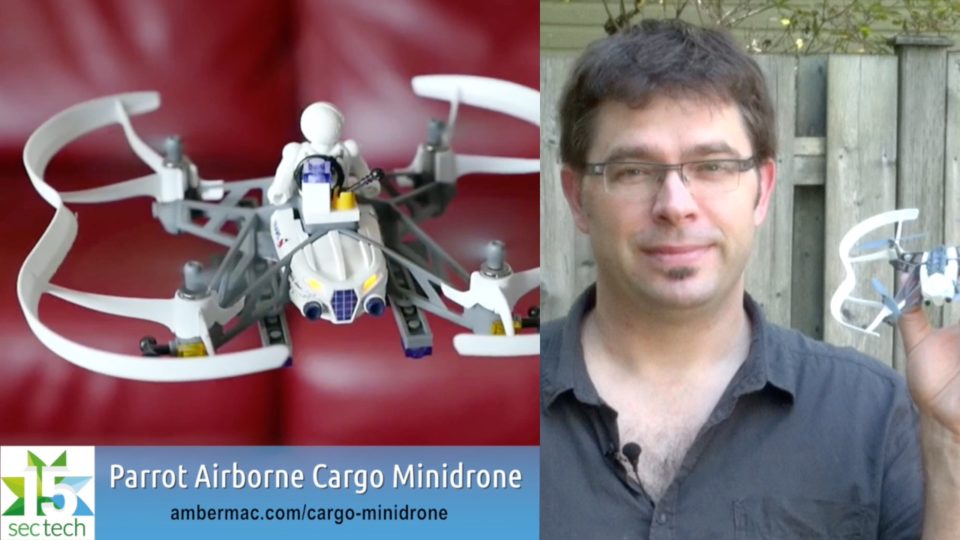 We reviews Parrot’s awesome Jumping Race Minidrone previously, and we’re loving their Airborne Cargo Minidrone as well. This quadricopter is a great entry-level drone that’s easy to fly, has four replaceable rotors, and can reach speeds of over 10mph. The “Cargo” in its name refers to the lego-compatible platform on top of the drone (and in a few other key places) that lets you mount an included figure or build lego-based structures onto your minidrone.

Operated using Parrot’s FreFlight iOS/Android app, you pilot the drone by tilting your phone in combination with onscreen controls that let you quickly make 90 and 180 degree turns, plus programmed tricks like front, back, and side loops. There’s a built-in, downward-facing still photo camera as well, though it’s just 640×480 pixels resolution, so don’t expect fantastic images but at least you can remotely take photos.

The drone weighs only 54 grams, so you won’t be able to fly it if there’s much wind at all, but it comes with plastic bumpers to help protect it and anything it might crash into, which does make it possible to fly indoors if you have the space. You can set a maximum altitude for the drone, which is great indoors and out to keep it from getting too far away.

The controller connection is through Bluetooth, so you’ll need to stay within about 60 feet of your drone – if you get out of range, the drone will simply hover until you move closer. The battery life is only about 10 minutes, after which the drone will land on its own, but you can get extra batteries to swap out and it takes roughly about half an hour to get back to full with a strong USB charger.

The Parrot Airborne Cargo comes in two varieties, Mars and Travis, each with a different figure and colour scheme, and costs just $100.